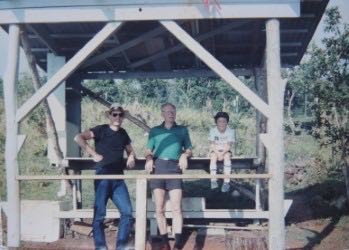 From left to right, my father, my grandfather, and me as a child in Hawaii, where he grew up.What follows is a story I've never told publicly, and have only been ready to share recently. In 2009, on February 27th, my father died. After months of pain, not understanding what was happening or how to deal with it, and seeing no way out of depression, he took his own life. I remember my father as a supportive, loving, thoughtful man, who had my back when it mattered, who taught me the value of integrity and patience, to make things right and own up to my mistakes when I made them, and he fostered my passion in the pursuit of knowledge.

It was like an atom bomb went off in my life when I got the news. I spent years in a compartmentalized state attempting to understand, cope with, and grieve his loss. Any emotion you can imagine, I felt it, but never in a straightforward way. Sometimes I couldn't cry despite feeling an intense need to do so. Sometimes I felt nothing, sometimes I would feel it well up inside me and I'd cry for seconds, and then feel nothing again. I had vivid dreams, often nightmares, every night for weeks, which slowly reduced in frequency over the course of multiple years, down to every other night, once per week, once per month, and then on rare occasions. I had to come to terms with the simple fact that I didn't have the coping skills to deal with something so emotionally complex and deep at the time he took his life. So, I sought therapy, both in a group setting and one on one, and ever since, I have been a part of a number of emotional support groups as a way to keep processing the loss and figuring out what I was feeling, why, and how to deal with it. The silver lining, was that in processing his loss, and finding what meaning I could, it fostered a deep inner strength within me, and a persisting awareness that our time is finite, and that a sense of duty that when I can, I should alleviate suffering and put positivity into the world.

It is now the ten year anniversary of his death, and I share this story not for sympathy, but rather, to honor his life and to hopefully take something often considered taboo, and bring it "into the light". Depression and suicide are real problems in our society, and much more common than any of us would like them to be. So, on the ten year anniversary of his passing, I want to share the story of my experience of his passing in hopes that others will be more willing to do the same. I hope being open might help those suffering from depression feel more supported and know that if they speak up, they aren't alone. In the end, it is my hope this helps someone find the courage, or compassion they need to seek help and support.

Finally, in addition to my hopes of easing dialogue around this difficult subject, I pledge to match whatever amount is donated to the American Foundation for Suicide Prevention, up to $5000, to provide the resources and support network for when people do reach out and seek support. Thank you for reading, and if you are able, and compelled to donate, I am eternally grateful.