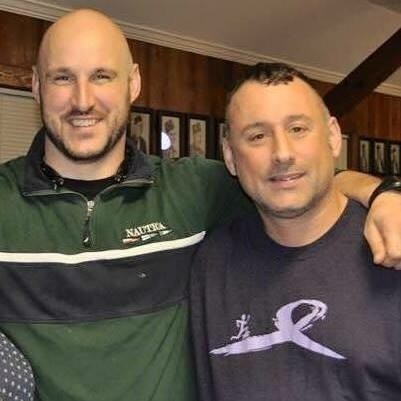 There was once a time when I would run to just reflect on life, my day, troubles, worries, happiness, family. It was my escape, no one but me and the road or trail. For two year I set goals, ran all kinds of races from 5k’s to full marathons. My next goal was to one day run an Ultra, either 50 miles or 100 miles.

The June 8, 2015 I got a call my baby brother was dead, at the time I was told it was a car wreck. My world was changed that day, as with any death grieving happens and everyone handles it differently. Later at the funeral home with family around I found out even more devastating news, Patrick had taken his own life, he died by suicide. I hope anyone reading this has never lost a loved one to suicide, it is a completely different kind of loss. There are unanswered questions, guilt, hatred and all of this never goes away. It is a roller coaster, up and down.

I began to research and read, I never realized how horrible of a disease this is, how overshadowed it is. It is not like the war on drugs or gun control you see on the news hourly. The only time we truly hear about suicide in the news is if someone famous dies. Every 40 minutes someone in the world attempts suicide. 22 Veterans a day lose the battle and commit suicide. Just in NC along it is the 3rd leading death of children ages 10-14, yes 10-14 year olds committing suicide.  That age they should be worrying about pimples or whether they want hot pockets or pizza rolls.

So I tried to get back to my running hoping it would clear my head, take away some of the pain. All it did was make me think of him more, all the times I missed, the opportunities lost. Am I over it, no, will I ever be, no. Yet, it is time I do something for him, to keep his story alive, to carry on a legacy for him, to not let his death go in vain. Therefore on his two year anniversary I made the decision I am going to run again, I am going to complete a 50 miler in his honor to raise money for Suicide Prevention. However as many of you know I ran into some health issues that had me out of work and training from late August till the start of 2018. This made it impossible for me to train adequately for Rocky Raccoon on 2/10/18. I have deferred to 2019, however I am now running Tunnel Hill 50 miler on 11/10/18 in his memory.

I will also be carrying names of any person who makes a donation in name of a loved one who has either lost someone to suicide, suffers from mental illness or they themselves have either issue. Together we will all be #TeamPatrick, together we can help raise money and awareness to this horrible disease that plaques so many.

My hope one day is this will no longer be an issues, that everyone will know they are important, their story is important and isn’t over. Hope is real. Help is real. Your story is important. Know if anyone ever needs an ear to listen, I am there for you. You are not alone

Even the darkest night will end and the sun will rise.